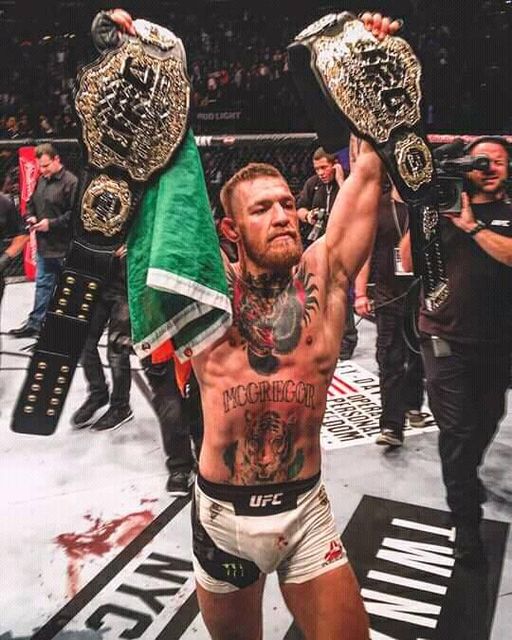 Conor right now reminds me of a lion, the king of the jungle, with this big giant mane, and this hot, smothering weather in Africa. And the small lions come up and poke at him, bite on his ear, bite on his neck, and the lioness comes over and bugs him. Then you’ve got the jackals and the rest of the wilderness looking and seeing these lions on the mountaintop. They come over and bother him. They eat all his food.” “ But Conor is gonna take care of the hyenas he’s gonna eat right through them. And you hear all that snoring from the rest of the division. That’s the same snoring your gonna be hearing later this year.

People like to talk about Negative things about Conor McGregor

People like to talk about Negative things about Conor McGregor but the Are Positive things they don’t talk about. Conor McGregor is an inspiration to many People,People like Israel Adesanya,Sean O’malley,Kevin Gasteluam and many more take inspiration from him…And He knows how to handle loss,critics all the Negative thing.His Mental Toughness is some thing else ,there way he take a loss it is like peanuts.Why He is like that? Because he does not focus too much on Negative emotions! He even spoils him self by spending his Money on fortune things,This shows how much He recognizes his Hard work.

He is loyal to his People,people who stood by him.Conor McGregor always stayed with SBG even though it is not the Best but he stayed there for a long time.But many people choose to Go to big Gyms like American Top Team ,This shows how much He is Loyal.Thats Why he Called TJ a snake on the Grass.

I like Conor McGregor Fights even if he does not win because he brings a lot of excitement inside the Octagon.i think that is why he is the PPV King.He is such an entertaining fighter.He been striking his opponents were they believe they don’t understand to be shots.He likes to bring New thing in the Octagon e.g He made us See that shoulders,Feet and Thighs can be Dangerous in Combat Sport if used proper,The Way he counter simultaneously
Like The Way he Punched Jose Also,His Movement is Fluid.
Let’s Appreciate this Man for his Entertaining Journey. He is the Muhammad Ali of the Mixed Martial Art.