Izzy competing in UFC in Middleweight Division and is currently Light Heavyweight.Reach 80 in (203 cm)
with Style of Kickboxing, Boxing Fighting. belong to Auckland and New Zealand

First UFC fight came in February of 2018 when he was an undefeated prospect but by the end of 2019. And rapid ascension was complete as he became the undisputed middleweight champion with a knockout victory over Robert Whittaker at UFC 243 in Melbourne.

After making his debut back in 2018, UFC middleweight Israel climbed the standings defeating opponent after opponent until claiming the belt in 2019 after securing the win over Robert Whittaker at UFC 243. 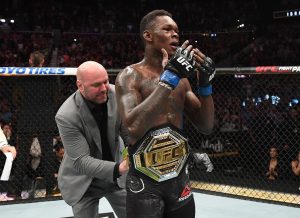 He’s literally cleared out his weight class in two years and almost all fought against top great fighter on this planet. And makes look easy. He doesn’t have or need one punch power to knocked someone out. But his striking is very tactical and accurate combination. He’s can be one of the greatest mma fighter ever. Ohh wait. He’s already is.
There are the following UFC Fighters that consider being the most popular fights with them.Adesanya Last fight with
Jan Blachowicz
Anderson silva
Robert Whittaker

All Fight records and next fight of Adesanya